The core difference between a credit union and a bank is we’re set up to serve the people who use us. That means we’re here for people, not investors. When you join the credit union, either by opening up a deposit account or by getting a loan, you become a member. With that membership you become an equal owner of the credit union. Compare that with a bank. Customers have no say in how a bank is run, instead it’s investors who hold all the power.

If you think that isn’t a big deal, look at the banks in our area. According to Nasdaq, Wells Fargo is almost 70% owned by investors. Not coincidentally, Wells Fargo announced it plans to shrink the number of branches it has from 5,400 to 4,000. That’s true for US Bank, which is nearly 75% investor owned, and has shrunk it’s branch footprint by 400 in the last year. Even local Umpqua Bank isn’t exempt. Umpqua is 89% investor owned, and announced last year a plan to close 13 – 22% of its branches to save money.

As you may guess, rural areas are hit especially hard. Less people means less opportunity to make a profit, and that means less service. These branch closures, which started during the financial crisis and have picked up steam since the current pandemic are creating banking deserts throughout rural America. That means not only is it harder to talk to somebody when you need to, but there’s a lot of evidence that simply growing up in a banking desert can negatively impact people their whole life.

Contrast that with WCU. In late 2019, we opened a branch in Forest Grove and already broke ground on a new state-of-the-art building to replace our current branch in Astoria.  Being in all these cities isn’t about the building. We’ve been rapidly expanding our online and digital capabilities to meet the needs of today’s consumers. In fact, we’d stack our digital options up against any bank. We know though, that sometimes you need to talk face-to-face with somebody, and that’s always part of our roadmap.

How We’re the Same

This part is a bit easier. Can you do it at a bank? Then you can at Wauna Credit Union too. In fact, studies show people tend to get better rates and have lower fees at a credit union than at a bank. That’s for both deposits and loans.

Can we really do everything that a bank can? Most people know about our deposit accounts, including money market and certificates. We’re known for our credit cards and vehicle loans, and people are learning how awesome our local mortgage team is for home loans, construction loans, home equity lines, and even investment loans. We have a full-service commercial lending and deposit program, and through our partnership with LPL Investments and our CUSO Cascade Crest Insurance, we can offer everything you need for your financial well-being.

Just as importantly, we employee local people from entry level to CEO. We understand the community, and we’re here. That means all decisions made are made by people who live and work here. We look at the individual, not just at numbers.

How financially savvy are your kids?

Only about five percent of adults received any kind of financial education in school. This is a very sobering statistic and may even somewhat explain why consumers’ credit card and student loan debt is so high.

If you want to equip your kids with the tools to be financially secure adults, a good place to start is with a savings and/or checking account at a credit union. Once they see money going in and coming out, it can drive home a lesson about money management.

Wondering if they can handle the responsibility? Read on…

Most kids can typically grasp the concept of a savings account early in their development. Here’s how to know if your children are ready to use one:

They’re curious about money
If your child expresses a genuine interest in coins, shopping, or anything related to money, this can be a good segue into a savings lesson: financial institutions allow you to put money aside until you really need it.

Their piggy bank is overflowing
If your kids have a lot of change in their piggy bank or saved elsewhere, watch out. It may disappear before your eyes! Make this an opportunity to teach them that if they save some of their money in an account, it can earn interest over time.

They have a savings goal
If your children are saving up for something big, this is the perfect time to introduce a savings account. They can make a deposit into the account so that they will not be tempted to spend all of their cash.

Checking accounts tend to be suited better to older kids who have had more exposure to money. Here are some signs that your kids could benefit from a checking account:

They’re responsible
No matter how responsible you are, it can be tempting to withdraw more cash than you should. You might wait to open an account with your children until they demonstrate responsibility in other areas such as getting a drivers license or maintaining a part-time job.

Their school doesn’t teach personal finance
Most schools fail to teach basic concepts of personal finance, which means that it is up to you as a parent. A checking account can be a great way to reinforce lessons about not spending more than you have, using a debit card, and more.

All their cash is stuffed into their wallet
The wallet-as-checking-account is dangerous for several reasons. Not only can cash easily get lost, it’s hard to track your purchases. By contrast, an account statement lets you view all of your spending and withdrawal activity, which can be a handy budgeting tool.

If you’re eager to introduce your children to the world of personal finance, a credit union account is a good place to start. Just watch for the signs, and start when your kids are ready. You can learn more and even earn prizes during this month’s Credit Union Youth Month celebration at Wauna Credit Union.

Credit unions provide all of the financial services you need: savings accounts, loans, financial education, credit cards, online and mobile banking, and more. The “more” part is the best part, because it represents your benefits as a member.

Okay, so what’s the difference between a credit union and a bank?

The key difference between local credit unions and other financial services is that we are owned by members like you. Unlike for-profit financial institutions, which take their marching-orders from stockholders, we exist only to serve you and your financial needs. You’re the boss! With no Wall Street fat-cats to pay, we are uniquely positioned to return direct financial benefits to members. This includes better interest rates and lower fees.

But what does that mean to you?

In 2018 alone, Oregon credit unions provided a whopping $152 million in direct financial benefits to over 2 million members. That’s the equivalent of about $75 per member, and $160 per household. Financing a $25,000 new automobile for 60 months at an Oregon credit union saves you an average of $177 in annual interest compared to what you would pay at the nearby bank.

How do credit union members benefit? 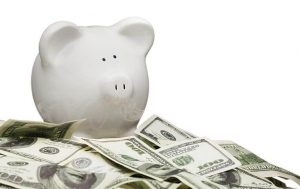 Do you want more examples of the benefits of belonging to a credit union? How does earning a better return on your savings sound? 2018 also saw the collective member benefit from higher interest rates on savings at more than $3.6 million. We supported local spending to the tune of $333 million. Not to mention a $1.8 billion boost to the Oregon economy.

To learn even more about how credit unions support the Pacific Northwest, visit OregonLovesCreditUnions.com. Find out why 50 percent of Oregonians have chosen credit unions as their financial services partners.

Wauna Credit Union is also a very safe place for you to save money. The National Credit Union Association insures all deposits up to at least $250,000 per individual.

So, spread the good word! Tell your friends to join a credit union today!

All analysis provided by economists at ECONorthwest, a highly regarded economic consulting firm.

Wauna Credit Union was formed, and continues to act, for the purpose of serving our communities of Clatsop, Columbia, and Western Washington Counties in Oregon, and Pacific County in Washington. We talk a lot about our charity, and about serving our members. What we spend most of our day-to-day work on is being a financial institution that is working to help our members achieve their dreams. A huge part of that is being a not-for-profit credit union instead of a for profit bank.

We put together a video on what that difference means for us. Check it out to hear about the Credit Union Difference.

In addition, ECONorthwest created an independent analysis that analyzed the gross economic impacts of credit unions in Oregon and Washington. The study measured the jobs, economic output, and income Wauna Credit Union contributed to the economy in 2016. 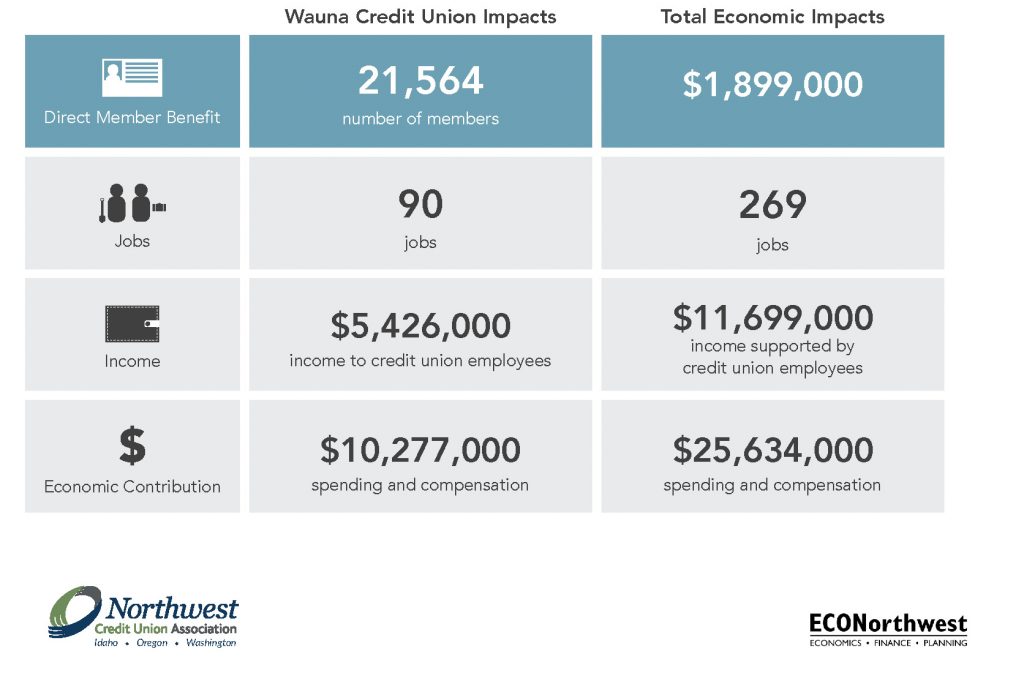 “We are thrilled by this wonderful recognition,” reports Sharon Borgardt, Chief Human Resources Officer for Wauna CU, “especially since the ranking is based on a survey comparing our employees’ level of pride and satisfaction to those of other similar employers.” Wauna Credit Union compared especially favorable to its peers in the categories of Management & Communication, Benefits and Compensation, Sustainable Practices, and Career Development & Learning.

“Much of the success of our organization is based on the amazing service our staff provides to over 20,000 local, member-owners,” says Robert Blumberg, CEO. “As an employer, we truly value our employees as the most important assets of our organization. We strive to provide a work environment that is positive, rewarding, healthy, and fun! The enthusiasm of our employees is conveyed each day through helpful and courteous service to our member-owners.”

Wauna CU has earned recognition as a Top 100 Best Green Workplace in Oregon for several years due to its commitment to sustainable practices.