Whenever we talk about Wauna Credit Union and what we do it comes back to the members. Anybody who has an account, loan or credit card at Wauna CU is a member and a shareholder, and gets a say in what we do. Nowhere is that more tangible than with the voting for our board of directors. Today 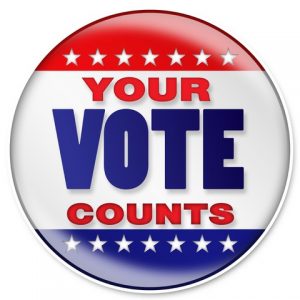 through February 26, 2017 all members age 18 or older who are in good standing are eligible to cast a ballot, either online, by mail or on Facebook.

Unlike for profit banks, where maximizing dividends for stockholders is most important, a credit union’s board sets policies to make sure decisions are in the best interests of you, the member-owners. Wauna Credit Union’s board consists of dedicated volunteers who represent the interests of the member-owners by meeting regularly with credit union management. This year we are electing three people, each of whom will serve a 3-year term.

As an added incentive 10 random voters will win $50 as a thanks from us for helping make sure our board reflects the wants and aspirations of all our members.

To learn more about the elections, as well as our annual meeting where we will announce the new board, visit our annual election page (waunafcu.org/about/annual-elections). Each of the candidates has provided a few words on why they want to serve on the voting page (cuballot.com/waunafcu).

There are three ways to vote.

To vote by electronic ballot:

To vote by mail:

We hope everybody gets a chance to vote. The more members vote, the more opportunity to have a board that fully represents the membership, and the better Wauna Credit Union is able to meet the needs of our diverse community.

When it comes to investing early in life, you likely have two things on your side: time and flexibility. Although a 2015 survey found that most millennials don’t think they’ll have enough money saved for retirement, investing is one way to help build wealth for the future. Here are some of the best investments you can make in your 20s.

If you have enough money set aside for a down payment, consider buying a home with rentable space, so you can live in one section and rent out the rest. Any rent you receive can help cover the mortgage and other expenses; the tax benefits of homeownership are substantial, and the home’s value will likely rise over time.

However, owning property comes with added costs, such as insurance, taxes and maintenance, while related income can drop if rental space goes unoccupied. There’s also the risk that property values might decline or rise only slowly, and if you wind up with an unruly tenant, evictions can be time-consuming and expensive. Unlike selling stocks or investment funds, you might find it harder to sell a home, should that become necessary. Property ownership generally should be regarded as a long-term investment.

If your employer offers a 401(k) plan, it’s a good idea to participate and see whether a Roth option is available. If it is, you can designate some or all of your contributions for a Roth 401(k), which means you forgo an immediate tax benefit, but withdrawals, including any investment gains, are generally tax-free. Younger investors are often in a better position to invest in riskier vehicles such as stocks as part of their retirement accounts, because they have more time to recoup any losses they may suffer.

Index funds, or funds that track the index of a specific financial market, are typically an easy-to-manage way for investing in the stock market. From 2005 to 2015, for example, the Standard & Poor’s 500 Index of U.S. stocks grew an average of roughly 8% per year. While past performance doesn’t indicate future returns, $5,000 invested in an S&P 500 index fund that gains 8% annually, with $60 a month added to the investment, would produce a nest egg of about $200,000 in 35 years.

Of course, there are other alternatives such as investing in individual stocks or commodity funds. As you get closer to retirement, it’s smarter to take a less-risky approach by shifting money to more conservative investments such as government bonds. (Some brokers offer mutual funds that will do the rebalancing for you, investing heavily in stocks when you’re younger and moving the money more toward bonds as you approach retirement age.)

If you don’t have a Roth 401(k) option, then a Roth IRA can be another way to accumulate tax-free wealth. These come with a contribution limit of $5,500 annually, along with other income-based restrictions. These funds can be invested similarly to a 401(k).

Keep in mind that investing retirement funds can expose you to the risk of losses. If you prefer the lowest possible risk, certificates of deposit offered by banks and similar savings certificates available from credit unions are generally insured for up to $250,000 but deliver relatively low returns.

As you decide how to invest your money, remember that starting now can make a big difference in determining the amount of money you’ll end up with later on, as any retirement calculator will indicate. Assess what investments make sense for you based on the money you have and the risk you’re willing to take to give your financial future a good boost.

Thanks to our friends at NerdWallet for this informative post.

Save the paper, reduce the clutter, & be more secure with E-Statements!

Want to stay up to the minute with Wauna CU’s Updates, Events, Alerts & Occasional Giveaways?

Enjoy great tips on saving, borrowing, and investing?
Do you like to see our staff being wacky, praised, & even promoted?

That’s what’s on our Social Media Channels – Check us out! 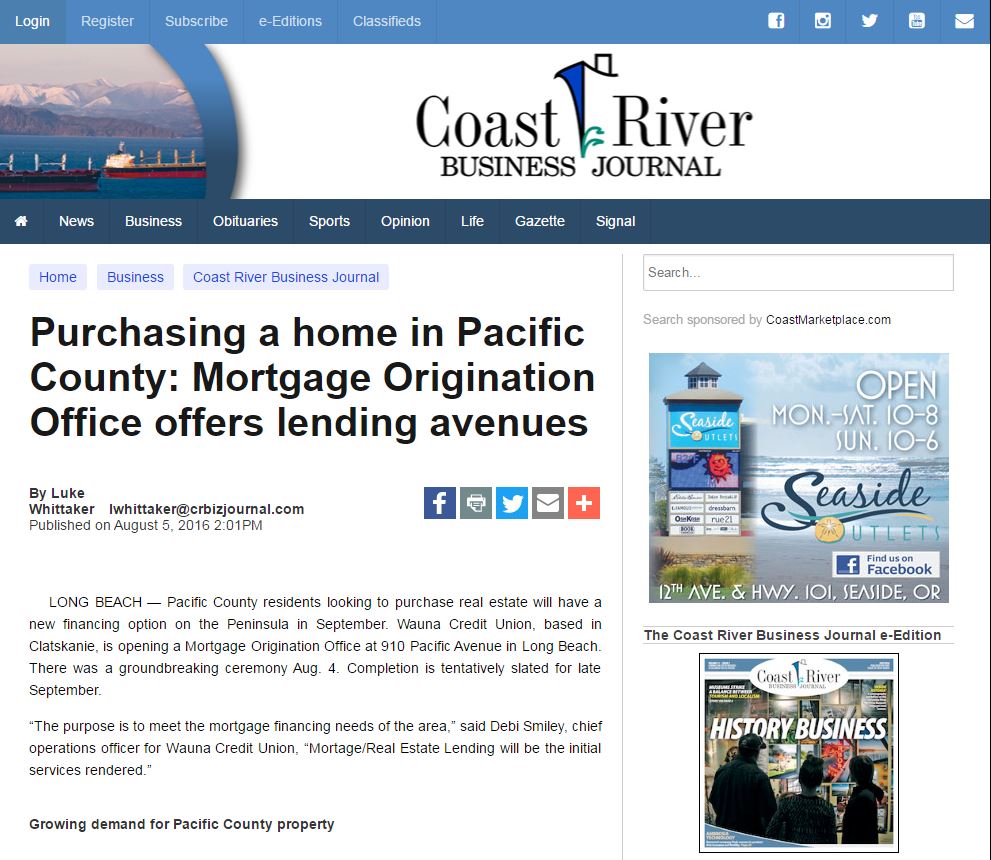 LONG BEACH — Pacific County residents looking to purchase real estate will have a new financing option on the Peninsula in September. Wauna Credit Union, based in Clatskanie, is opening a Mortgage Origination Office at 910 Pacific Avenue in Long Beach. There was a groundbreaking ceremony Aug. 4. Completion is tentatively slated for late September.

“The purpose is to meet the mortgage financing needs of the area,” said Debi Smiley, chief operations officer for Wauna Credit Union, “Mortgage/Real Estate Lending will be the initial services rendered.”

“Recently it was brought to our attention by local real estate Agents that there was a growing demand for Real Estate Lending in Pacific County,” Smiley said. A feasibility study was conducted and the results reflected that the number of real estate transactions has significantly increased during the past 5 years and continue to climb annually.

“This reflects a strong demand for Real Estate financing,” Smiley explained, “We believe WCU can assist in meeting this need,” said Smiley adding that WCU has served Pacific County since July of 2012.

“It is our goal to provide a service that assists individuals in purchasing the home of their dreams,” she summed. WCU has braches offices in Astoria, Clatskanie, St. Helens, Scappoose, Vernonia, and Warrenton, Oregon with total assets exceeding $200 million.

“Total Membership exceeds 22,000 members including more than 600 in Pacific County, and employs more than 100 local employees,” according to Mike Chapman, WCU vice president of marketing. “WCU officials partnered with local businesses for our construction needs including Rickenbach Construction, Inc. (RCI), of Astoria, Oregon. RCI was selected as the general contractor for the Long Beach project and recently-built branches in Warrenton, St Helens, and the current remodel of the Clatskanie Branch.” 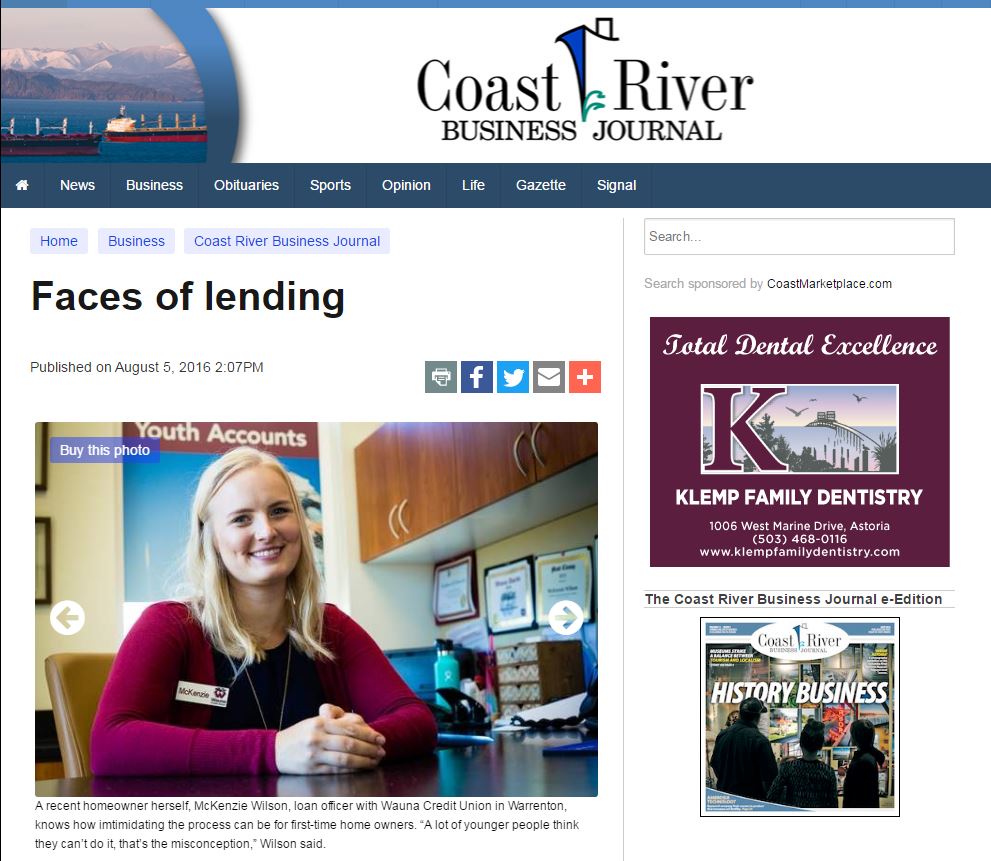 “I started at Wauna 12 years ago in the Warrenton branch and then moved into the loan department over in Astoria. Then made my way up to Saint Helens. Right now I’m the assistant vice president of the mortgage department. I oversee the staff at all the branches.”

What misconceptions exist about financing for a first home?

“A lot of younger people coming in think that the process — that they can’t do it. That it’s a super hard process to buy a house. I think that’s the misconception — that people think it’s impossible to buy a house sometimes. It’s really not, especially working with the credit union. We’re giving the guidance to get to that point, we’re not just saying ‘no’ and sending you back.”

How has lending evolved?

“I’ve definitely seen a change. I’ve been doing it since 2004, I went through the crisis, people rebuilding their credit. The best thing right now is we’re seeing people starting to regain equity in their homes, which is allowing them to improve their current housing situation.”

What advice would give a first-time borrower?

“Come prepared with a budget. And not more so a “this is a house I want to buy.” Think more toward, is that monthly payment going to fit into your budget. If fixes come about, am I going to be able to afford these fixes? I think that’s the biggest thing, just having all that in mind.”

What’s the typical down payment?

“We can do as little as little as three percent. Typically it’s about three to five percent. With more first-time homebuyers we don’t see a lot in the way of down payment money because there are programs that offer 100 percent financing. But we encourage it, the more they put down the better their rate is going to be.”

On best preparation, what do you take into account?

“Our borrowers definitely have to be more on their game. They have to have a pre-approval in hand. Since homes are selling so quickly, those borrowers that have worked hard to prepare themselves with us are the ones making the offer, and it’s accepted because they know they have all their ducks in a row.”

Typical time a house is on the market?

How does it compare to 10 years ago?

Is there a typical mortgage rate?

“It varies depending on the program they’re doing. You have government program in the low 3-percent range, then you’ve got your conventionals that are higher 3’s — still great compared to what it’s been in years’ past.”

“Our borrowers definitely have to be more on their game. They have to have a pre-approval in hand. Since homes are selling so quickly, those borrowers that have worked hard to prepare themselves with us are the ones making the offer, and it’s accepted because they know they have all their ducks in a row.”