At the annual Winter Celebration held on December 10, 2016, Wauna Credit Union CEO & President Robert Blumberg handed out 10 awards to outstanding employees. The most coveted award of 2016 Producer of the Year went to McKenzie Wilson, Real Estate Loan Officer at the Warrenton branch.

The reward was a surprise to McKenzie but well deserved. She was sitting with her husband Vince listening to her boss Monica Lauber, VP of the Mortgage Department give the final award of the evening, when she slowly realized 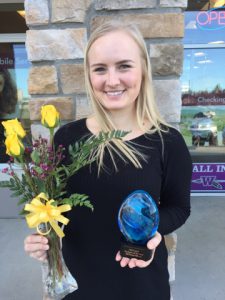 Monica was talking about her.

McKenzie started as an intern at WCU during high school. She left for a few years after graduation and decided to come back to WCU. She will celebrate her 5-year anniversary at WCU this year, and knows there will be many more to come.

She said the most satisfying thing about her job is getting first time buyers into a home and helping people consolidate their debt with Home Equity Line of Credit loans. “I grew up in Knappa, so I’m not just getting loans for strangers. The members we work with were my friends growing up and their families. It’s very rewarding to be able to help them realize their dreams.”